Enderun Colleges gives students the opportunity to explore the wonders of different countries by offering once-in-a-lifetime exchange programs. Last 2018, students were given the choice to study and stay in South Korea or Japan for a whole semester. Abegail Umali, Angela Sanduco, Karlos Rodejo and Seth Ravanzo were the chosen students to represent Enderun Colleges in South Korea – enabling them to experience a new way of studying and interacting with international students and professors in their host university. 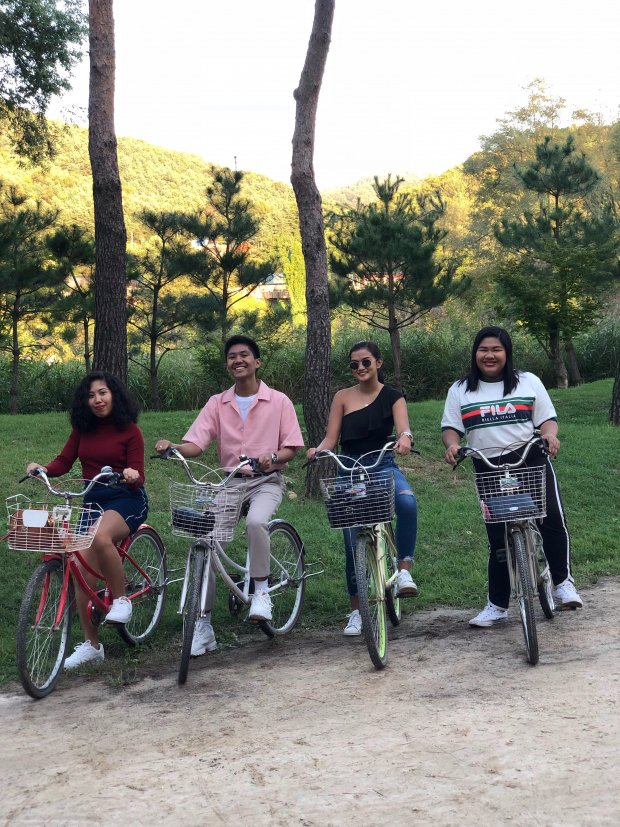 Abegail Umali, Karlos Rodejo, Angela Sanduco and Seth Ravanzo having the time of their lives in South Korea

Behind the Important Decision

For four months, these students immersed themselves in a completely different environment and culture in hopes to widen their global perspective and to learn something in return. The opportunity to study a semester abroad is an experience worth grasping for. “I wanted to try something new,” Abegail explained. “I can say that this is a unique opportunity during my college years in Enderun.”

For Karlos, a semester abroad allowed him to face and conquer his difficulty of stepping out of his comfort zone. “I was intimidated and scared to apply for the exchange program at first, knowing that I was going to live and study in a country I never visited before. With no familiar faces, it made me feel uneasy. However, my goal last year was to not let this fear get in the way of me experiencing new things, developing my skills and growing as person, so I took it upon myself to go for the program.”

The same reason as Karlos applies to Angela. She originally had no intentions to apply for the program. However, she realized that her life needed a change. “My life, at that moment, felt like a routine so I applied for the exchange program because I wanted to do something different.” Seth agreed with Angela and Karlos. “Even though it does sound cliché, I felt the need to explore beyond my comfort zone and see what else the world has to offer outside of my little bubble.”

Being One with the Locals

Abegail Umali and Karlos Rodejo resided in Daejeon and studied in Hannam University. They both had amazing things to say about their school. One being how Hannam was able to make them both feel they belonged. “The school treated me like I am really part of their school and not just another foreign kid in town. The professors and the people around me were very helpful and approachable. Hannam included Karlos and I in the benefits that were given to regular students.” Abegail explained. Karlos added, “I immediately felt accepted with open arms the moment I set foot on campus. Abegail and I were always greeted with warm welcomes every morning. Hannam University knows how to take care of their students well. I know this because I experienced it myself. Professors would always ask how I’ve been doing and how my stay was so far. It was really great to know that everyone around was nice.” On the other hand, Angela Sanduco and Seth Ravanzo, who studied in Namseoul University in Cheonan had something similar to say about their university. “Perfect” was the word Angela used to describe her host university. “Ms. Nari and all the professors were very welcoming and helpful. [The professors] assisted us with all the things we needed. Also, the Korean students were also very thoughtful by inviting us to do different activities. They would also recommend places to visit during our stay in Korea.” Seth concluded that her university was the best. “The school is very suitable for exchange students like me because everything is taught in English.” Seth even discovered how her university was very helpful for her course as a business student. “Having a large network as a business student is important and our school helped us widen our global network by creating events that allows us to meet other exchange students,” she explained. Four Months Stay in One Word

If you were to ask Abegail, Angela, Karlos or Seth to describe their four-month stay in South Korea in one word, this is what they’ll have to say:

“Growth,” Abegail said, “I never imagined myself to experience a semester in Korea in my life. It was my first time to stay in a foreign country and live on my own for four months. At first, I thought I wouldn’t make it because I didn’t even know how to cook. However, you know when you’re on your own, 2,500km away from your parents, when you are forced to learn ‘adulting 101’. It felt like four months is not enough for an experience that was so fulfilling but this experience of studying abroad gave me a different outlook in life. I felt like I did not just grow mentally but spiritually as well.” “Transforming,” Karlos said, “The exchange program taught me that stepping out of my comfort zone isn’t bad at all. It can be nerve-wracking and it can make me feel anxious but sometimes we need to take that extra step to push ourselves to grow. I believe that growth doesn’t only appear in one place. If you want to change for the better, you need to be willing to be uncomfortable because taking a leap of faith into something you never did before is the only time you find out who you are truly capable of becoming. I have learned and experienced a lot in Korea. With that, I believe I have grown to become a better version of myself.” “Life-changing,” Angela said, “It made me a better person by being more independent and more open in all aspects of life.” “Unforgettable,” Seth said, “Immersing myself in the education system of South Korea served as a great way to really experience and understand the people, its traditions and culture because I’ve also been exposed to people from different countries. I met a lot of great people along the way that stayed with me throughout my whole journey and that made me realize that life is beautiful. These people I call my friends played a great impact in my life. I created a lot of meaningful friendships and it allowed me to broaden my network. It is a beautiful thing to say that you’re friends with people around the planet, and you’re all bonded by one common trait: love for adventure and new experiences. This is a once-in-a-lifetime experience that I will forever be grateful for.” Abegail, Angela, Karlos and Seth experienced a lot during their four-month stay in South Korea. They will use their experiences to carry the lessons they were able to learn and apply it in their everyday lives in the Philippines.

As for Angela, she learned to dream big, not just for herself but for her country. “Staying in a first world country, for four months, where everything is technology-based and efficient, I promised myself to work harder so I can make my country, the Philippines, a better place in the future.”

During Seth’s stay in South Korea, she learned to keep an open mind. Seth explained, “Culture affects people’s perspective. My opinion doesn’t mean that others are wrong about theirs. I believe that there are different ways of seeing things.” Similarly, Abegail agrees with what Seth had to say. “We should really value our culture and be mindful of the things that we do when we come across different people from all over the world. We all have different cultures, which affects our perspectives on things, that we should respect.”

For Karlos, he learned to live the moment. “Four months in Korea was, honestly, not enough for me. That is why I decided to live everyday like it was my last. I would never say “No” to an invitation because I knew that my stay in Korea won’t be permanent. Before, I used to be on my phone all the time, however, I realized that I have also stopped using my phone in public, despite having Wi-Fi access everywhere. I started to enjoy the moments and taking in the beautiful views. With that said, I was able to disconnect from the virtual world and reconnect with the real world, allowing me to appreciate what was right in front of me.”

To conclude, this is a piece of advice from Seth Ravanzo to those who are interested. “It will be hard at first but once you are fully adjusted, you will have the best time of your life. This is a truly a unique experience so just go out there, experience new things and don’t be afraid to step out of your comfort zone.”