Handog Kalusugan, a feeding program led by Enderun Colleges with the support of Amalgamated Specialties Corporation and Pediatrica, Inc.

Just a few kilometers away from the towering skyscrapers of Bonifacio Global City and the picturesque township of McKinley Hill where Enderun Colleges is situated, lies a community that displays no hint of extravagance and whose people strive daily to make ends meet. This was destination Handog Kalusugan,  Saturday morning of December 17, 2016.

A group of professors, students and employees headed towards Gawad Kalinga Taguig in Barangay Pinagsama to organize a feeding program for the children of Jack ’n Jill Village. This is a project site constructed in 2007 through a tie-up between JG Summit Holdings Inc. and Gawad Kalinga. Today 48 families live here. We had just finished setting up the area on the fourth floor of the school building, when a swarm of children and some mothers, occupied the empty monoblocs. The room was buzzing with tiny voices, filled with excited faces of children whose ages ranged from three to ten.

Enderun maintains a close relationship with Jack ‘n Jill Village. According to Ate Lanie, one of the mothers, the children and the group of parents who serve as teachers for the Child Youth Development program visited Enderun Colleges on several occasions. Recently, they attended a cooking seminar on campus. Families residing at Jack ‘n Jill Village, she added, receive donations from their sponsor, Universal Robina Corporation.

Mr. Macky Maceda, one of the directors of the Sustainability and Environmental Studies Department of Enderun Colleges, was given the hard job. Teach the children the word sustainable. Sustainability refers to maintaining the health of two things: ourselves and the planet. “Ang basura ba’y sustainable? (Is garbage sustainable?) The children answered in unison, ‘Hindi po!’ (No!) Eh kapag naglinis ng basura, sustainable? (How about cleaning the garbage? Is it sustainable?) ‘Opo!’ (Yes!).” The future is bright for these kids.

Of course, the program wouldn’t be complete without games! Bambike founder and co-director of the Sustainability Department, Mr. Bryan McClelland, introduced the Bambino, a small bike especially designed for kids that would be used in the game. The Bambino doesn’t have pedals. In order to move with it, one has to stride his legs and peddle with his own feet.  It’s safe to use even if the child doesn’t know how to ride a regular bike. And he learns two wheel balance naturally.

The children were divided into four groups. Two groups competed in turn and the winners for each round battled against each other. Each kid would ride the bike, go around the student standing like a post, and back again in the line. The first group to finish wins. Let the race begin! 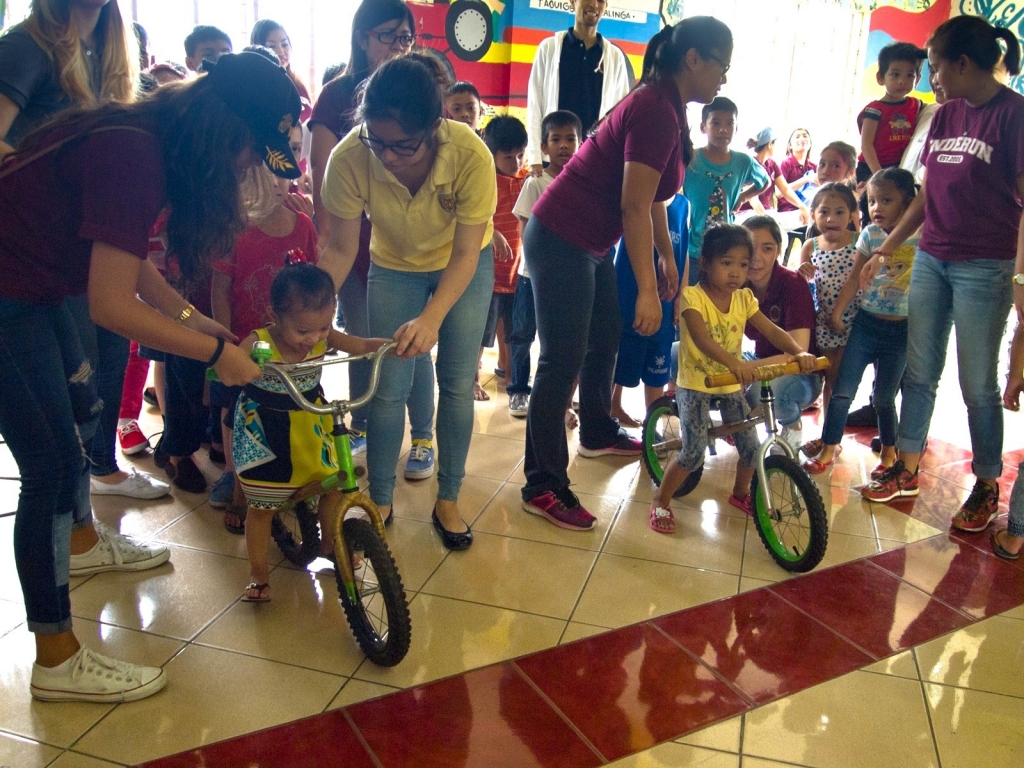 Lining up for the race. Photo by Mark Jose Competitive and ecstatic, the children were all out in supporting their fellow teammates. For the Titans, the bikes were so small, they had no space to peddle their legs! The winning group with their ates and kuyas.

Before proceeding to lunch, Gian Aquino, a Culinary Arts student at Enderun, demonstrated the proper way of washing one’s hands which should take as long as the happy birthday song. Kids raising their palms open as Gian puts soap on them

The nourishing lunch was prepared and cooked by the members of Culinaire. Kudos to these guys for a job well done! Nourishing, healthy and delicious! Afterwards, we distributed to the children the loot bags that contain supplies, medicine and packed goods and gave them a big hug. Group selfie before we bid goodbye (Photo by Mark Jose)

The children of GK Taguig have touched our hearts in more ways than we imagined. From their warm welcome to their active participation, we felt that we had succeeded in our cause— to bring, not just food and presents, but true joy to these kids. Indeed, their gleeful eyes said it all. We are likewise thankful for having been given the opportunity to help our little brothers and sisters from Jack ’n Jill Village.

This simple community, not too far from the skyscraper side of the city, rightfully prides itself for its camaraderie and concern for each other, and for its hard grit to build its own tomorrow.

For all of us, the spirit of Christmas was truly alive in the sweat and effort, as in their gleeful smiles and echoing laughter.